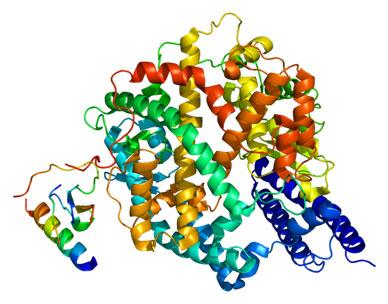 The human Angiotensin converting enzyme 2 (hACE2) is a transmembrane metalloenzyme occurring on epithelial and endothelial cells of lungs and other organs and tissues. It is the primary binding and entry site of the SARS-COV-2 virus, the pathogen that causes COVID-19. Image based on Pymol rendering of PDB file 1r42. Author: Emw. This image has been reproduced in the original and without any modifications. Use of this figure is governed by the Creative Commons Attribution-Share Alike 3.0 Unported license.

The SARS-COV-2 virus binds to the ACE2 (Angiotensin converting enzyme 2) cell surface receptor to effect an entry into epithelial cells of the lower respiratory tract and lungs, from where it is disseminated to the kidney, liver, brain, eyes, gastrointestinal tract and other tissues that bear this protein. The virus disrupts the Renin-Angiotensin-Aldosterone system (abbrev RAAS) and its functions in electrolyte and water balance, blood pressure, homeostasis, among others. Scientists have scrambled to understand its pathogenesis (and the pathophysiology of the host), in a variety of animal models such as mice, rats, Syrian hamsters, ferrets, palm civets, and monkeys. Of these, mice are genetically the most tractable, inexpensive, and available in a variety of strains. Monkeys and other primates resemble humans most closely in their genetic makeup, but public sentiment is against large animal models, and their use must be kept to a minimum. The question of interest dictates the choice of model, but none of these models naturally bear the human tissue that is the natural target of the pathogen. This is a handicap. Immunodeficient mice that are reconstituted with a human immune system (HIS) and grafted with relevant human tissue address this problem, and have been available much before the onset of the pandemic. A supplemental human cytokine environment and various other physiological tweaks are engineered into these mice to reproduce as faithfully as possible the human context.Such humanised mice are apropos, and valuable enough for the American National Institutes of Health to sanction USD 1.2 million for the development of humanised mice models for COVID-19 early on in the course of the pandemic.

Mice aren’t normally infected by SARS-COV-2, but when grafted with human lung tissue or expressing the transgenic human ACE2 receptor are susceptible to it, and display viral pathogenesis and the accompanying human immune response. Some mice models may have ACE2, along with various human receptor proteins accessory to the infection, transgenically introduced into the other target tissues as well.BLT humanised mice are created by the transplantation of haematopoietic adult stem cells (HSCs, or Bone marrow cells) in immunodeficient mice also grafted with autologous Liver and Thymic tissue. Such mice further transplanted with human lung tissue have an expanded tropism for human pathogens. Implanted human lung tissue vascularises, grows, and gets populated by B- and T-lymphocytes responsible for adaptive immunity. Wahl et al created two viable versions of the model by implanting lung tissue in immunodeficient and BLT mice. A second humanised model, the DRAGA mouse (HLA-A2.HLA-DR4.Rag1KO.IL-2Rγc KO.NOD) has been shown to naturally reconstitute (in itself) human epithelial and endothelial cells
containing the ACE2 receptor, and to exhibit sensitivity to the SARS-COV-2 virus. Mice so infected exhibit consistently a range of symptoms, disease severities, and host responses akin to the disease in humans. Nonhumanised mice with a transgenic ACE2 receptor have also been developed for COVID-19 studies, but have lesser use because they lack a human immune system.

Chimeric (humanised) mice can help significantly with preclinical assessment and development of drug candidates and vaccines even if genetic proximity to humans makes non-human primates the preferred models. They can be used in studies of pathogenesis, the immune reactivity of the host, and drug therapies, inclusive of the synergistic and antagonistic interactions of drugs administered simultaneously. Murine and human genomes are sufficiently distinct for a drug successful in the first to fail in the second; but drugs that exhibit cytotoxicity in the preclinical screen in mice can be eliminated before clinical trials. Antibodies generated against SARS-COV-2 in humanised mice resemble the antibodies in convalescent human plasma in sequence and profile, proving that humanised mice can be used to prepare a therapeutically effective antibody cocktail. Furthermore, because the humanised mouse can “indistinguishably mimic” the antibody
response of a human subject, it is a fair candidate for vaccine/prophylactic testing. Incompletely studied vaccines can run dangerously counter to their purpose, and a platform for expedited testing is welcome.

The conservative base of the current American administration is opposed to the use of human foetal material in the creation of the humanised mice (cord blood is still permitted, but BLT mice require foetal tissue). This is unfortunate, because the humanised mouse is so well suited to the problem at hand, and because stifling this science puts the public in harm’s way. The pandemic may be a good time to revise the pertinent ethical considerations that go into the apportioning of funding resources for the humanised mouse. Notwithstanding the politics, the humanised mouse model will form the mainstay of biomedical research forthe foreseeable future. For now, it is interesting to watch humanised mice “happen” to SARS-COV-2.