The humanized mouse as an agent for immuno-oncology therapy 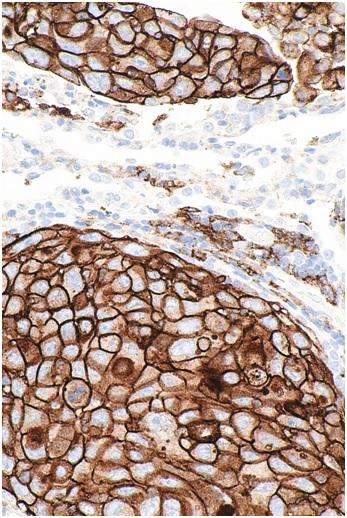 PD-L1 positive lung adenocarcinoma from a PD-L1 immunostain. Figure reproduced without modification from Wikipedia. Use of this figure here is permitted under the Creative Commons Attribution 4.0 International License.

James Alison and Tasuku Honjo discovered that blocking certain proteins (The CTLA-4, and the PD-1) of the immune system releases the system to attack cancer cells, studies in this area of immunotherapy have surged. The discovery has sparked hope in cancer researchers, physicians, and patients alike, and resulted in a Nobel. That a decontrolled immune system can surveil and remove cancer cells without harming other tissues of the body is a pathbreaking concept.Because the therapy targets the cancer only indirectly,it causes lesser cytoxicity and has fewer side-effects. The therapy currently includes roughly three approaches: immune checkpoint blockade therapy, adoptive cell therapy, and cancer vaccines. The first therapy targets proteins that keep the body’s immune system in check, and “releases the brakes” on the same, allowing the immune cells to go after cancer cells. The second, namely adoptive cell therapy (or ACT) utilises the immune cells from the patient (isolated, expanded in the lab, sometimes genetically modified, and then put back in the patient)to eliminate the cancer. Cancer vaccines are, like any other vaccine, prophylactics.

The development of the therapy has moved faster than our understanding of the mechanisms that underlie it, and an appropriate model is necessary for its continued and facilitated study. Because humanized mice have a human immune system (HIS), reconstituted via human haematopoietic adult stem-cell progenitors (either CD34+ HSCs, or PB mononuclear cells), they have quickly become the preferred model for immunooncology studies. Humanized mice models are being used to study molecular and cellular mechanisms, trial drug combinations, and drug efficacy, and are expected to evolve as more molecular targets are identified, and more therapies explored.

Work with humanized NSG mice has vindicated their potential as model for the preclinical study of immune-based therapies. Mice are engrafted with human CD34+ Haematopoietic stem cells (HSCs) or peripheral blood mononuclear cells (PBMCs) along with the patient-, or cell line-derived tumour xenograft. Mice are then treated with approved immunotherapeutic drugs (Ipilimumab (Yervoy®), Nivolumab (Opdivo®), Pembrolizumab (Keytruda®), or another investigational antibody-drug, and the regression of the tumour and the mouse’s survival assessed. Both patient- and cell line-derived xenografts have been shown to grow in these mice just as robustly as in non-humanized NSG mice (BLT humanized mice have also been shown to work). They have been shown to be effectively inhibited by Pembrolizumab, a programmed cell-death protein inhibitor; moreover, the efficacy of the therapy has been shown to be dependent on the number of CD8+ T lymphocytes that populate the tumour microenvironment. Because only a subset of patients responds to anti-PD-1/ PD-L1 therapy, rational combinations of these inhibitors have been tested, also in humanized mice, to examine and evaluate the cancer-directed human immune responses. The HIS’s action against cancer/tumour is normally suppressed in the mouse, just as in a human patient, and this action can be released using the therapeutic. The model allows the recovery of lymph and tumour cells for analysis for immunological analysis.

The humanized mouse model has been tested against several types of cancers including lung cancer, Leukemia, triple-negative breast cancer (TNBC), non-small-cell lung cancer (NSCLC), sarcoma, and bladder cancer. Various populations of blood cells such as BLymphocytes, TLymphocytes, Natural Killer (NK) cells, Dendritic cells (DCs), and Myeloid-Derived Suppressor Cells (MDSCs), or in other words, blood cells with the CD45+, CD20+, CD3+, CD8+, CD56+, CD68+, CD33+ markers, are observed in the blood, spleen, and bone marrow, along with the attendant human cytokines; the graft-versus-host disease (GvHD) is markedly absent. T lymphocytes isolated from the mice, and tested ex-vivo, are functional. The growth of the engrafted tumour appears to be independent of the HLA type of the donor. 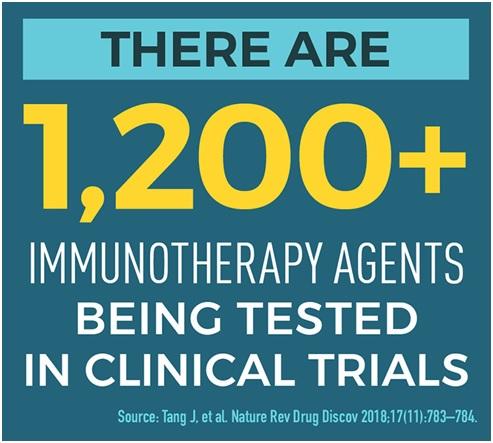 The above knowledge testifies to the proper reproduction of the human immune milieu in the model. It follows that the interpretations from such studies are predictive of the human system, and can enable the clinical decision-making process for the administration of individual or combination immunotherapies. Through the agency of the humanized mouse, the revolutionary concept can now be translated into cures, and affect many lives for the better.